The relationship between Gil Grissom and Sara Sidle is one of the oldest on CSI: Crime Scene Investigation.

The relationship was nicknamed GSR by fans, short for "Grissom Sara Romance". This is a pun on the CSI abbreviation, "Gun Shot Residue". In a May 25, 2006 interview with the Chicago Tribune, the show's executive producer Carol Mendelsohn indicated that the relationship between Grissom and Sara is "not so new" and they have been a couple for some time.

Sara and Grissom have appeared to be romantically attracted to one another from the start.

Grissom and Sara met on one of Grissom's lectures at San Francisco prior to the start of the show.

Grissom brought in Sara from San Francisco to investigate Warrick Brown's whereabouts when Holly Gribbs was shot. He later offered Sara a position as a CSI at the LVPD Crime Lab (to replace Holly Gribbs) in which she accepted ("Cool Change").

Sara asked Grissom if he wants to sleep with her, but it shows that nothing happened

Sara asked Grissom to go to dinner with her, but he says no.

He pins her against the wall in Invisible Evidence. They share what is presumably a long stare with some tension in the air whether it be sexual or romantic or just confusing we don't know. Sara soon and it's that she always over talks when around him.

In Butterflied he begins to question his workaholic lifestyle and he suddenly realises when he missed out. Still he wasn't sure if it was worth the risk which he couldn't take thinking Sara didn't hear it but she did.

Sara opens up about her past to Grissom in Nesting Dolls, which becomes the turning point of their relationship.

In the sixth season finale, it is revealed that they are in a relationship, which stirred up great debate among fans. The final scene of the episode showed Grissom reclining on a bed, talking about how he would prefer to die. He says he would rather die of cancer so he would have time to say goodbye to his loved ones. Sara comes out of the bathroom in a bathrobe, and says, "I'm not ready to say goodbye."

Grissom and Sara continue to be involved, but have been trying to keep their relationship secret from their co-workers at the lab. However, in the season premiere episode co-worker Warrick Brown paid some note when Grissom delivered a veggie burger to Sara, who was working late on a case, but neglected to bring him dinner as well.

In the following episode, Conrad Ecklie commented that "of course" Sara would agree with Grissom instead of him, which made Sara and Grissom worry for a moment that he might have caught on to the relationship. They are also still learning about one another.

In Double Cross, Sara discussed religious beliefs with Grissom while they investigated a murder in a Roman Catholic church. She is agnostic, while Grissom is a lapsed Catholic who still believes in God. When she asks if she has offended him with her opinions, Grissom replies "No, dear." Also, once Grissom started to complain to Greg about loud music, but then Sara says that she turned the volume up and Grissom immediately changed the subject.

When she was about to shave him she asked if he trusted her, he answered by saying intimately before she shaves him (Fallen Idols).

In Ending Happy Grissom says that sex without love makes you sad. Sara replies “I’m pretty sure I don’t make you sad.” implying that they have sex. Grissom replies no, confirming that they love each other.

In the season finale, Sara is abducted by the Miniature Killer, and Grissom realize that this crime is personal. Feeling cornered, Grissom says that Natalie holds him personally responsible for taking Ernie Dell, the only person she ever truly loved,

In A La Cart eckile asks questions about their relationship. Sara says it started two years ago in season 6 and Grissom when they met at the conference. Both say they first had sex two years ago which would be season 6.

Sara leaves the crime lab in Goodbye and Good Luck due to burnout, leaving Grissom hurt and devastated.

In Leave Out All The Rest, Sara breaks up with Grissom via a webcam video, which gives him emotional turmoils.

Grissom ultimately decides to leave the crime lab in One To Go and goes to find Sara in Costa Rica.

Now married to Grissom, Sara returns to Las Vegas once again to assist the short-staffed crime lab, after the departure of Riley Adams.

Sara shows signs of frustration with her long-distance marriage to Grissom, avoiding his phone calls. he calls her in Dead Air which she answered to but Later in episode Forget Me Not, when Sara becomes a suspect in a murder investigation - where she's been framed, she reveals to the CSI team that she and Grissom have split up.

Grissom and Sara reunite after Grissom returned to Las Vegas to help the CSIs investigate a bombing at one of Sam Braun's casinos. The casino once owned by Sam Braun called Eclipse belongs to Catherine, and Lady Heather was the main suspect. Lady Heather tested Grissom and Sara, but in the end when the case was solved, Grissom told Heather his feelings for Sara. Sara saw the video, and they sailed off into the sunset in Grissoms boat 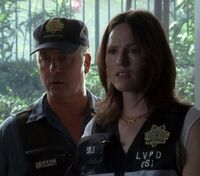 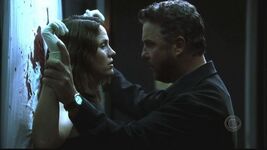 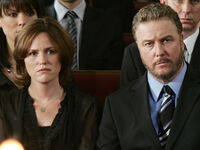 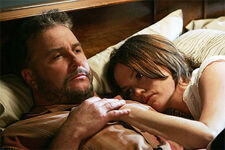 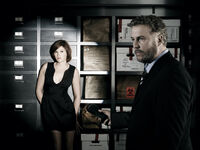 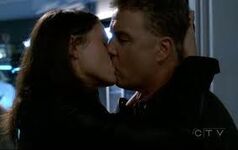 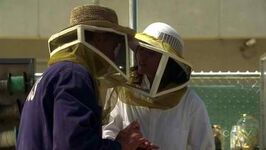