Wendy Simms was a lab technician at the Las Vegas Crime Lab specializing in DNA analysis.

She later resigned from her position for good in the Season 11 episode, Pool Shark after getting a job from the Crime Lab in Portland, Oregon which would enable her to go into the field and allow her to live closer to her sister.

Her departure left her colleague, David Hodges, who had feelings for her, devastated.

Wendy is a kind, caring person, who always does her job with care and detail. She often makes quick witted comments especially about Hodges. She also remains to be the only person to ever make Hodges speechless as he had romantic feelings for Wendy. However Wendy never officially returned them until when she kissed him in Field Mice.

Wendy was born in 1972. [1] She worked in San Francisco, California for a time before moving to Las Vegas to take the DNA tech position (Secrets and Flies).

In You Kill Me, Wendy is both a murder victim and a murderer in Hodges' board game. She becomes offended when she finds out her character is named Mindy Bimms, the "buxom, yet clumsy DNA tech."

In A Space Oddity, she runs into Hodges at a sci-fi convention based mostly on the fictional show Astro Quest. They find that they have a shared love for the show. While there, Hodges speaks to her in the fictional Vellikon language. She invites Hodges over to her place to watch some episodes, but Hodges loses himself in daydreams about Wendy and blames her for it, leading her to cancel her invitation. Later on, when she translates what Hodges said into English, it translates to "we were made for each other."

In Field Mice, she and Hodges, under the guise of being actual CSIs, lead young "crime cadets" into the field to investigate a fire in an apartment building. At the same time, fellow lab tech Henry Andrews has gotten Hodges' blessing to ask Wendy out on a date. However, she sabotages Henry's plans for the date, revealing her true feelings for Hodges later with a kiss.

In Pool Shark, Wendy tearfully tells Hodges that she has accepted a job in Portland, Oregon in order to be with her sister. Her job will allow her to work in the field instead of in a lab. She tells Hodges that she purposely made him the last to know since she knew he would try to get her to stay. Before Hodges can reply any further, she gives him a hug and tearfully tells him goodbye. 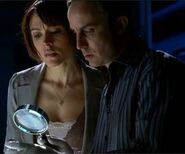