William Louis Petersen (born February 21, 1953) is an American actor and producer, best known for playing Dr. Gilbert "Gil" Grissom on the hit CBS series CSI: Crime Scene Investigation, and as Will Graham in the film Manhunter.

Petersen was born in Evanston, Illinois, the youngest of six children of June (née Hoene; 1909–2006) and Arthur Edward Petersen, Sr. (1907–2004), who worked in the furniture business. He is of Danish and German descent. He has two brothers, Arthur, Jr. and Robert, plus three sisters: Anne, Mary Kay, and Elizabeth. He graduated from Bishop Kelly High School in Boise, Idaho, in 1972. He was accepted to Idaho State University on a football scholarship. While at Idaho State, Petersen took an acting course which changed the direction of his life. He left school along with his wife, Joanne, in 1974 and followed a drama professor to the Basque country where he studied as a Shakespearean actor. Petersen was interested in Basque culture and he studied the Basque language, Euskara, and gave his daughter the Basque name Maite Nerea (meaning My Beloved); she was born in Arrasate - Mondragón 1975. Petersen returned to Idaho intent on being an actor. Not wanting to work a non-acting job in Idaho, he returned to the Chicago area, living with relatives. He became active in the theater and earned his Actors' Equity card. He performed with the Steppenwolf Theatre Company, of which he has been an ensemble member since 2008, and was a co-founder of the Remains Theater Ensemble which also included other prominent Chicago actors Gary Cole and Ted Levine.

In 1985, Petersen received his first break when he starred as a Secret Service Agent gone rogue to avenge his mentor in William Friedkin's 1985 action film To Live and Die in L.A. The following year, Petersen starred in the first Hannibal Lecter film, Michael Mann's Manhunter, playing FBI agent Will Graham. Because his role in Manhunter was so emotionally exhausting, he did everything he could to rid himself of Graham after finishing principal photography. He shaved off his beard, cut his hair and dyed it blond. He also claims to have done this because, while rehearsing for a play in Chicago, his dialogue was always coming out like Graham's; he dyed his hair so he could look in the mirror and see a different person.

Petersen declined a part in Oliver Stone's Platoon, as it would have kept him in the Philippines, away from his family. Instead, he worked on the 1987 HBO made-for-TV movie Long Gone as a minor league baseball player and manager. Petersen was offered the role of Henry Hill in the movie Goodfellas, but also turned it down.

In a 1990 ABC three-part miniseries, The Kennedys of Massachusetts, Petersen played U.S. President John F. Kennedy's father, Ambassador Joseph P. Kennedy. The film won an Emmy, and a Golden Globe from eight and two nominations, respectively. Also in 1990, Petersen portrayed the infamous Patrick Floyd "Pat" Garrett in Young Guns II. In 1993, Petersen appeared in another miniseries, Return to Lonesome Dove, and in 1996's Fear. Having already portrayed Joseph and John F. Kennedy, another political character came his way with the 2000 release The Contender. Petersen played the role of Governor Jack Hathaway, an unscrupulous candidate for Vice President following the death of the incumbent.

He appeared uncredited in the noir thriller Mulholland Falls as a character who finds himself on the violent receiving end of a Los Angeles police squad's tactics. He starred in Kiss the Sky and also appeared as part of an all-star cast in a remake of the film 12 Angry Men with Courtney B. Vance, George C. Scott, Jack Lemmon, and Mykelti Williamson.

From 2000 to 2010 Petersen played Dr. Gil Grissom in the CBS crime drama CSI: Crime Scene Investigation. Petersen took a break from CSI to appear in a five-week run of the Trinity Repertory Company production of Dublin Carol in Providence, Rhode Island. On the evening of Wednesday, May 30, 2007 Petersen was at Wrigley Field to join WGN radio sportscasters covering a Chicago Cubs – Florida Marlins game and he mentioned he had seen CSI: The Experience at the Museum of Science and Industry on the South Side of Chicago. He was on a nine-week break from the show at the time, and he expressed how he and his castmates were "blessed" to have such a successful series when he had seen shows starring friends cancelled after only a few episodes.

Petersen renewed his contract with CBS to appear on CSI for the 2008-2009 season, reportedly for $600,000 per episode. On July 15, 2008, Associated Press reported that Petersen was leaving the show as a regular following Season 9's tenth episode in order to pursue more stage acting opportunities, but that he might return for guest spots. He remained an executive producer of the show.

On February 3, 2009, Petersen was honored with a star on the Hollywood Walk of Fame. Most of the cast and crew of CSI: Crime Scene Investigation came out for the ceremony. Petersen's star is located at 6667 Hollywood Blvd, directly in front of the legendary Musso & Frank Grill.

Petersen reprised his role of Gil Grissom in the eleventh season CSI episode, "The Two Mrs. Grissoms," which aired on CBS on February 3, 2011.

On May 13, 2015, Petersen decided to return for his final appearance along with Marg Helgenberger, after George Eads and Elisabeth Shue were leaving CSI since they opted not to renew their contacts and would not appear in the TV movie / series finale "Immortality."

On February 2020, Petersen announced to return for the sequel along with Jorja Fox, before the series was picked up as CSI:Vegas.

Petersen married longtime girlfriend Gina Cirone in July 2003. He has a daughter, Maite (born in c. 1975), from his previous marriage. Maite gave birth to his grandsons, Mazrik William and Indigo August, in October 2003 and August 2009, respectively. Petersen is an avid Chicago Cubs fan. In 2004, Petersen described to Playboy Magazine a near death experience he had in the 1980s, which gave him assurance that there is an afterlife.

On July 5, 2011, Petersen and Cirone (via surrogate) welcomed twins, a son and a daughter. 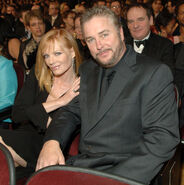